Home / Blog / Hottest States in the US 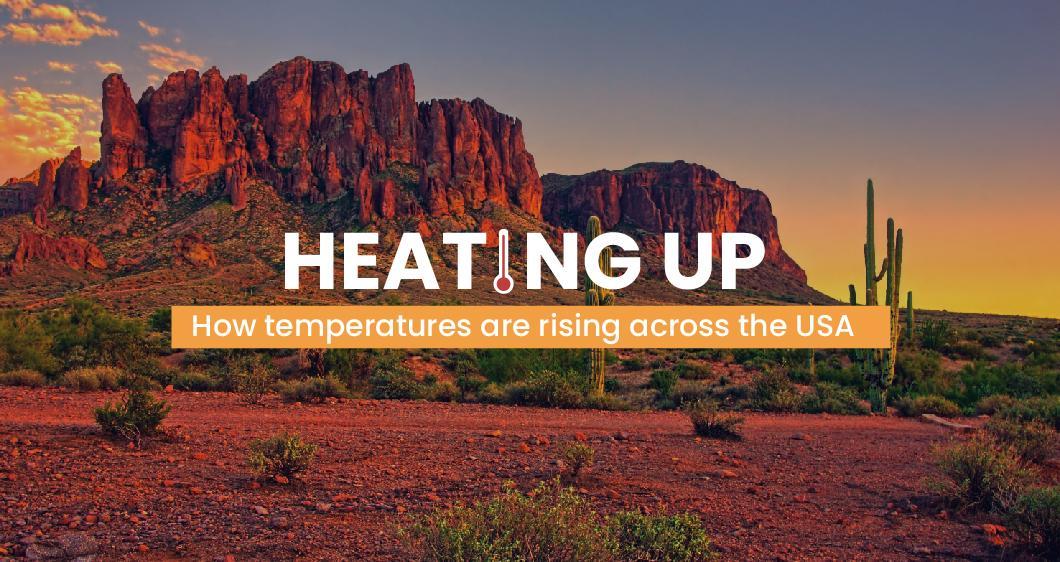 Hottest States in the US

How temperatures are rising across the USA

We know that due to the effects of climate change, temperatures around the world are on the rise. This change will not only affect wildlife and the natural environment but will also impact our own daily lives. As temperatures increase, we will need to adapt the way we live to accommodate the more frequent hot weather. This could include all sorts of things, from changing the types of clothes we wear to building cooler and better-ventilated homes or even introducing an afternoon siesta in the hottest regions.

However, we also know that temperatures will not rise evenly across the country and that certain areas might heat up at a rapid pace whereas others will experience more gradual warming. With this in mind, we wanted to find out which parts of the country have heated up the most.

We’ve gathered temperature data both for the country as a whole and on a state-by-state basis, so you can see which states are changing the fastest.

Why are temperatures rising?

Global temperatures are worryingly increasing due to climate change. As humanity has grown and developed, we have started producing an ever-increasing amount of greenhouse gas emissions, such as CO2. As these gases fill the atmosphere, more heat is prevented from escaping into the aether, causing the planet to heat up.

Human activity, such as deforestation and urbanization, has meant that there are also fewer natural carbon sinks to absorb excess carbon dioxide from the atmosphere, adding to the rate of temperature increase.

Also, as the ice caps, glaciers, and snow-covered parts of our world begin to melt, this process will be sped up. This is due to there being fewer white patches on the planet which have historically reflected much of the sun’s heat back away from the earth.

Temperature increases in every US state 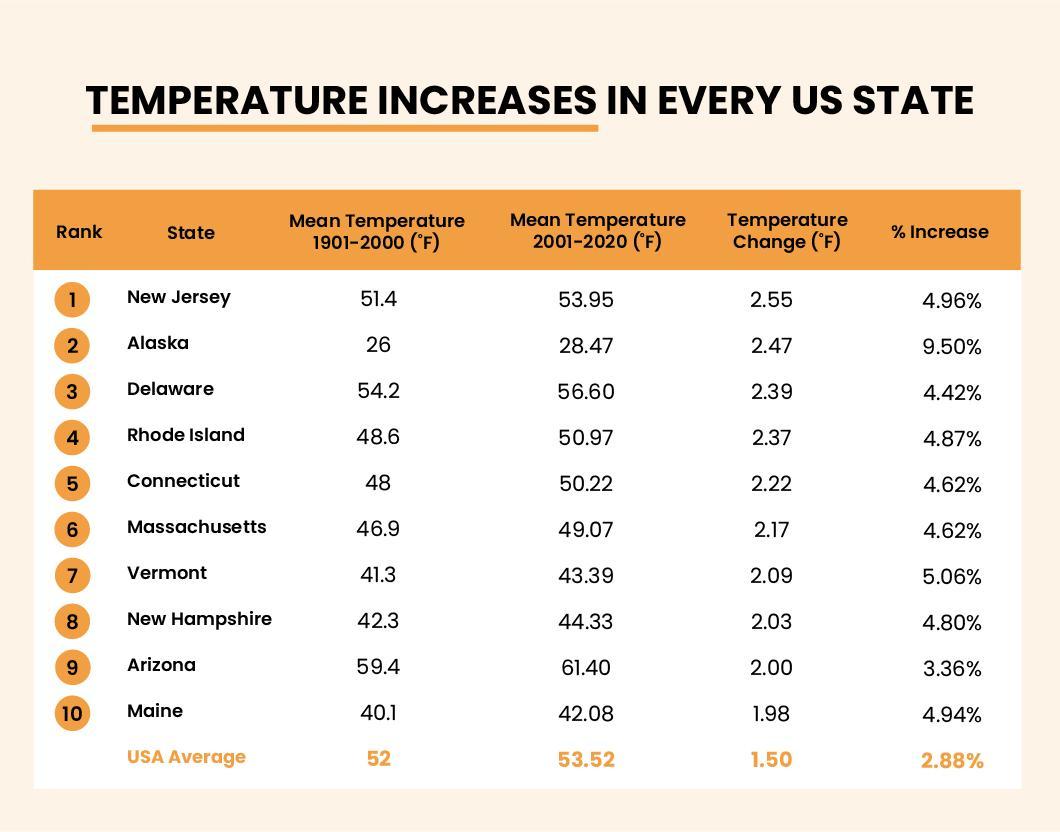 The US states with the biggest temperature increase 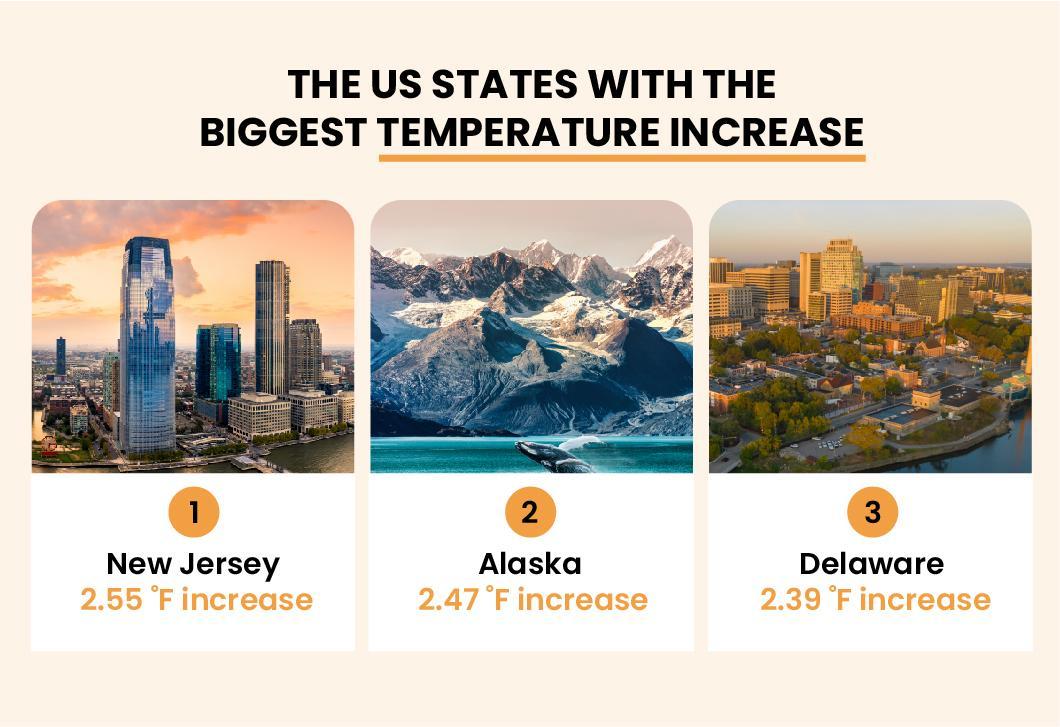 New Jersey is the state that has experienced the biggest increase in temperature when compared to the 20th-century average, with a rise of 2.55 ˚F. Alaska has the second-highest rate of warming, with temperatures rising 2.47 ˚F since pre-2000 levels, while Delaware takes third place with a temperature increase of 2.39 ˚F.

It is also worth noting that temperature increases can be more or less severe at different times of the year. These seasonal differences can be seen below:

The US states where winters are getting warmer 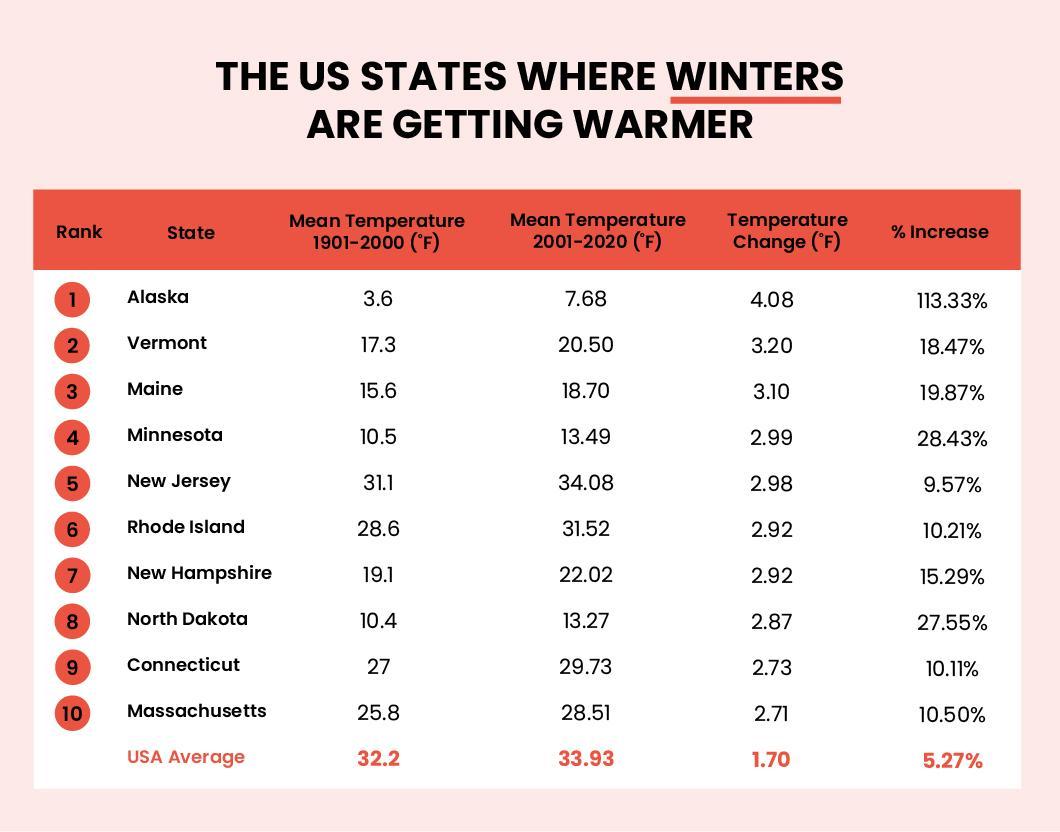 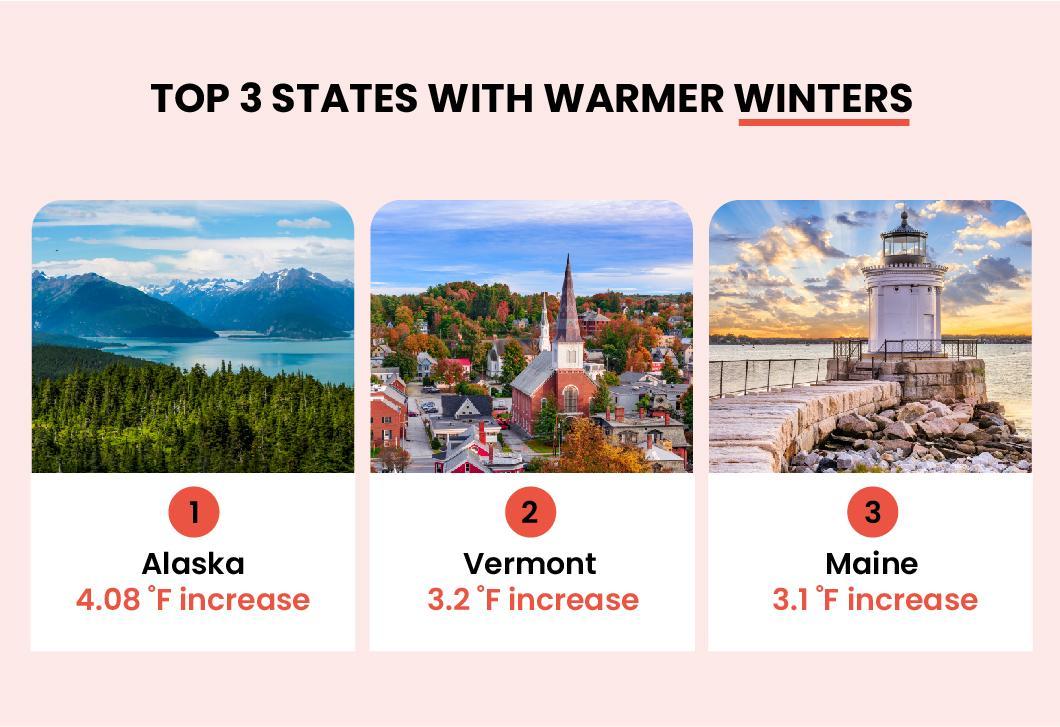 This data shows that there is a greater increase in winter temperatures among more northerly states, with the top three increases occurring in states that border Canada. Alaska, the most northerly US state, has the highest increase at 4.08 ˚F, followed by Vermont at 3.20 ˚F, and Maine with 3.10 ˚F.

The US states where spring is heating up the most 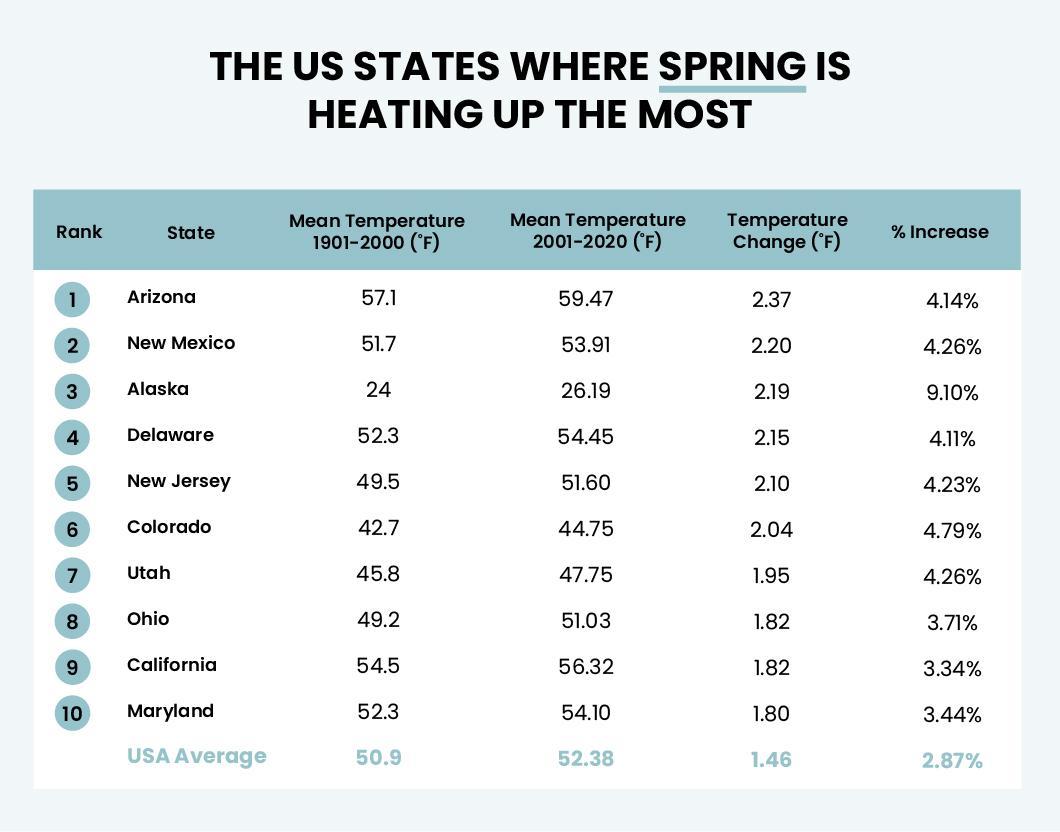 Top 3 US states for hotter springs 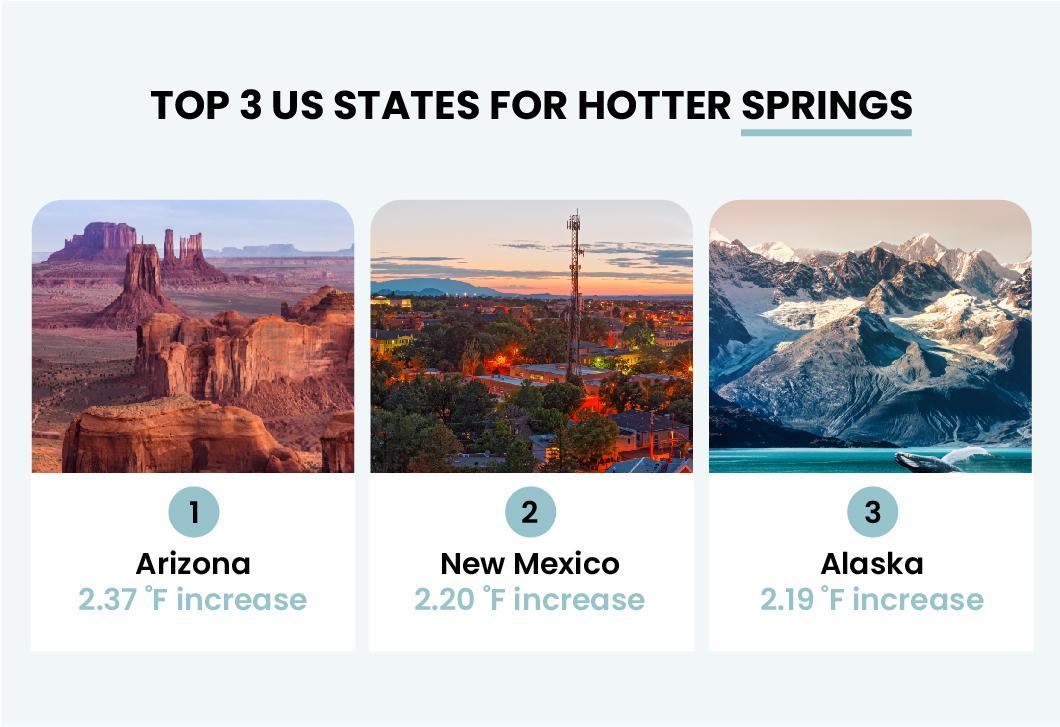 US states with scorching summers 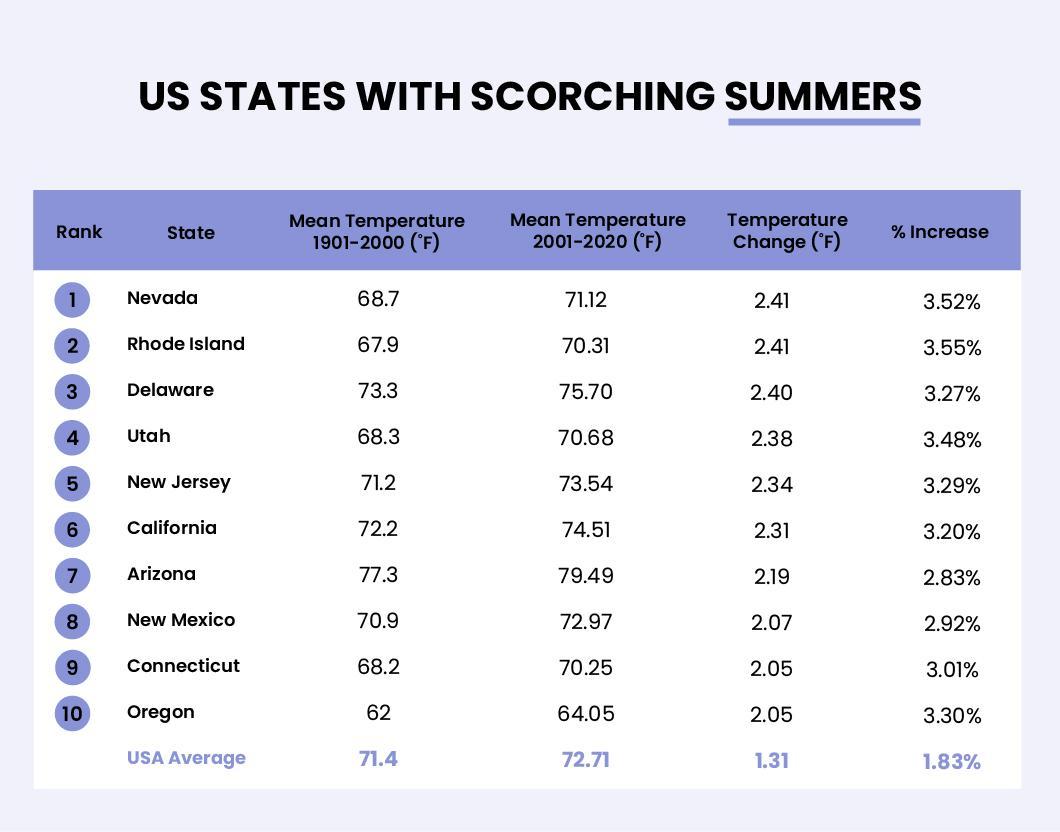 Top 3 US states where summers are warming up the most 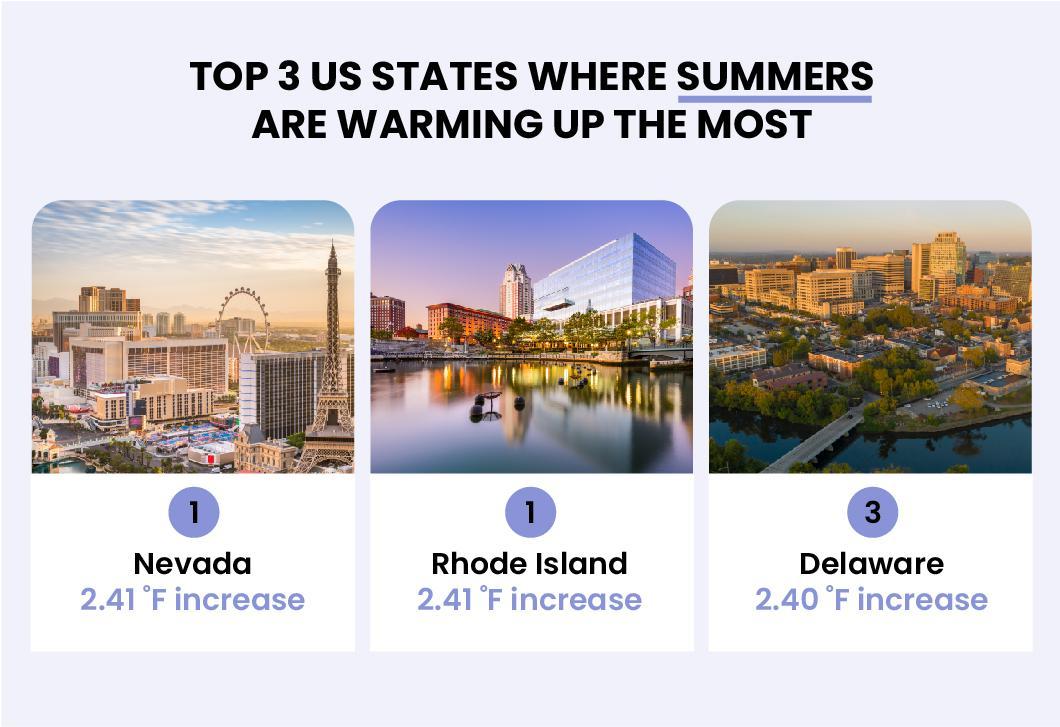 The figures for summer increases reveal a large number of states in the southwest and northeast of the USA having the greatest rises in temperature. Nevada and Rhode Island are tied for the greatest summer increase, with both states recording a rise of 2.41 ˚F. Delaware takes third place with an increase of 2.40 ˚F.

US states with the biggest fall temperature increase 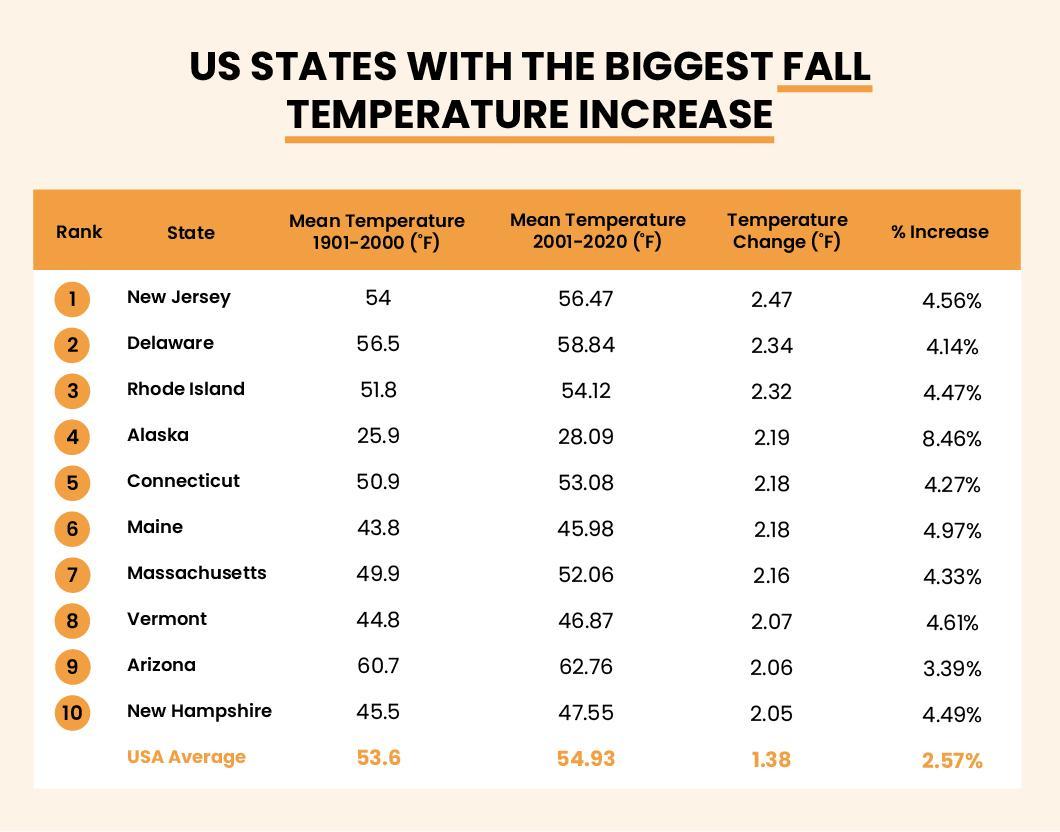 Top 3 US states for warmer falls 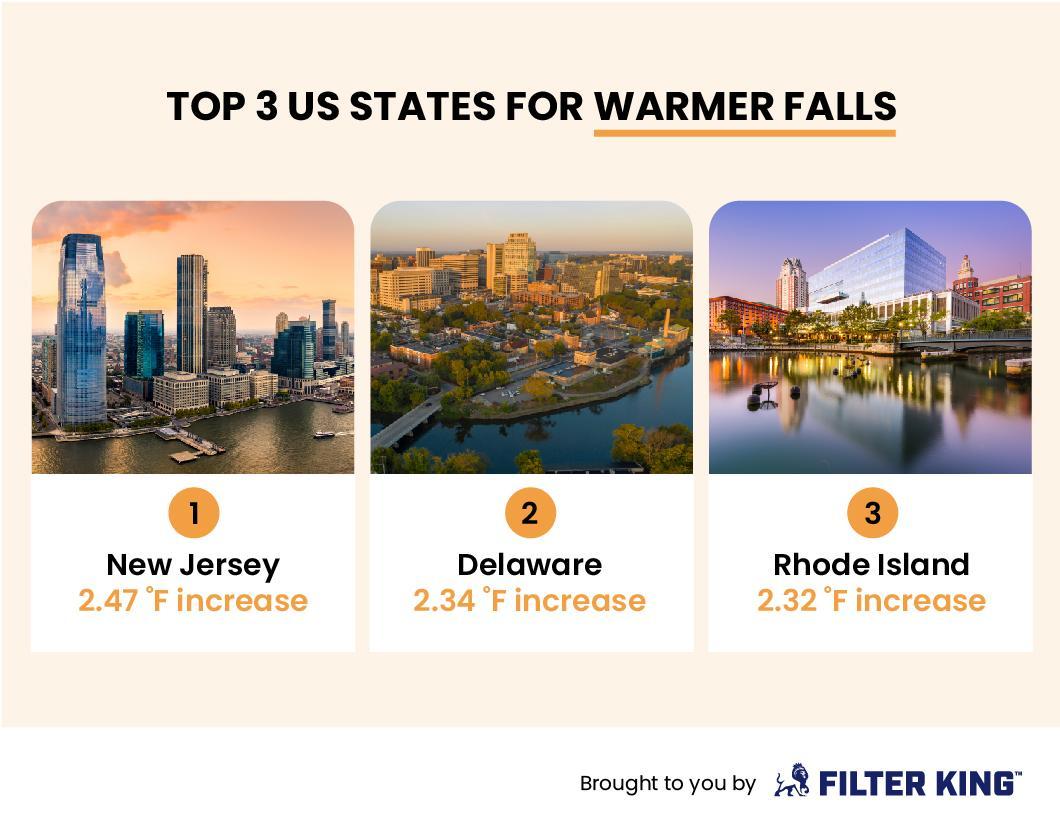 States in the northeast of the country dominate the top ten for temperature increases in the fall. New Jersey takes the top spot with an increase of 2.47 ˚F, while Delaware and Rhode Island take second and third with 2.34 ˚F and 2.32 ˚F respectively.

We wanted to find out which states have experienced the greatest increase in temperature this century when compared to the average levels of the 20th century. To do this, we used government data from the National Oceanic and Atmospheric Administration (NOAA).

We gathered data for each US state as well as for the country as a whole. We were able to compare historic levels with more recent years to provide a picture of the changing climate of the United States.

Here are 5 hottest states in the US with an average annual temperature above 60.0°F:

How To Change Air Filters 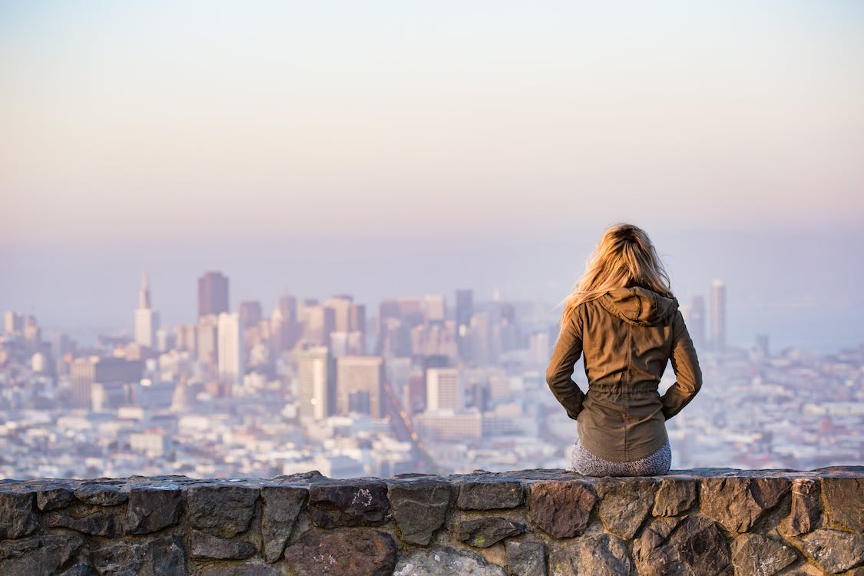 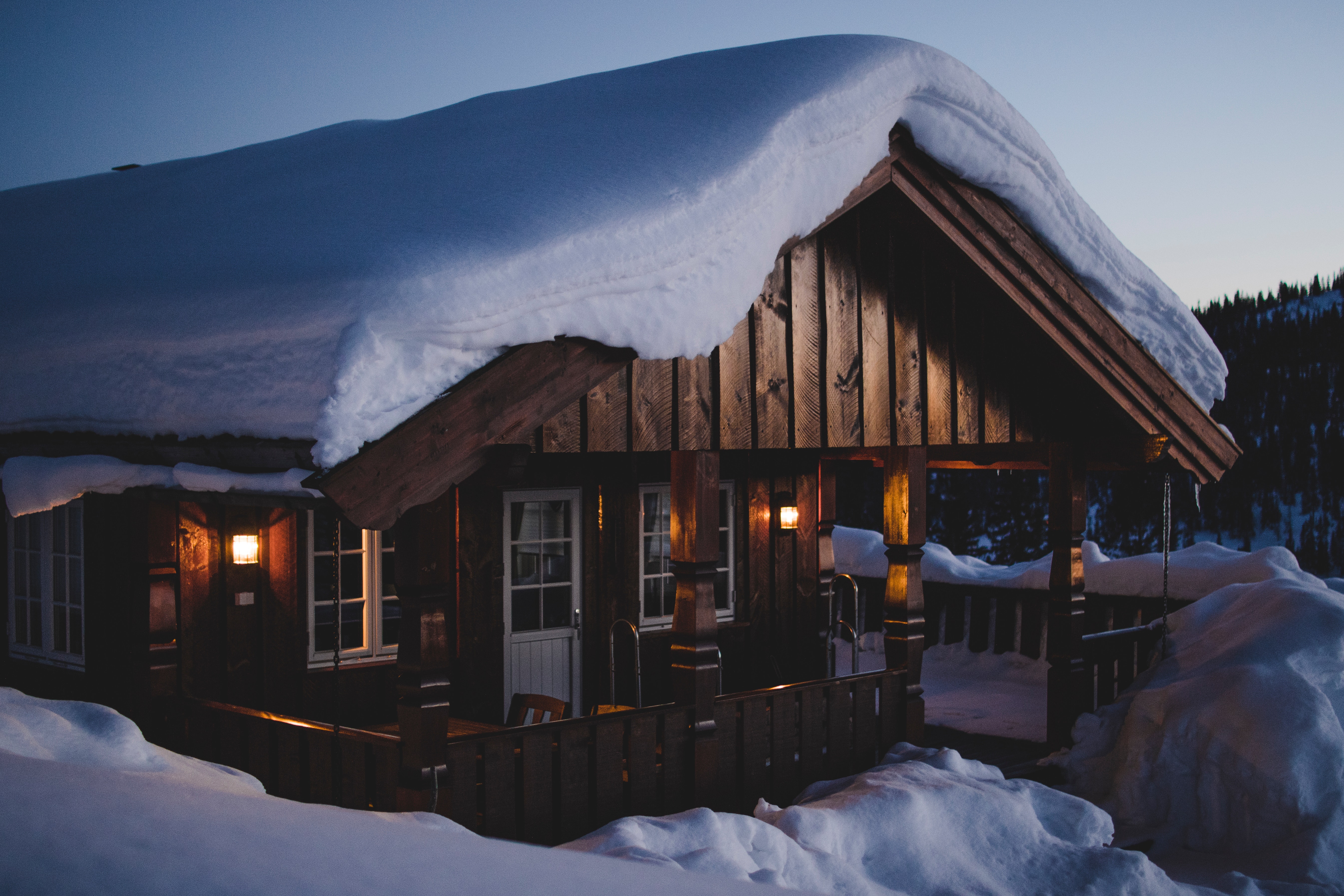 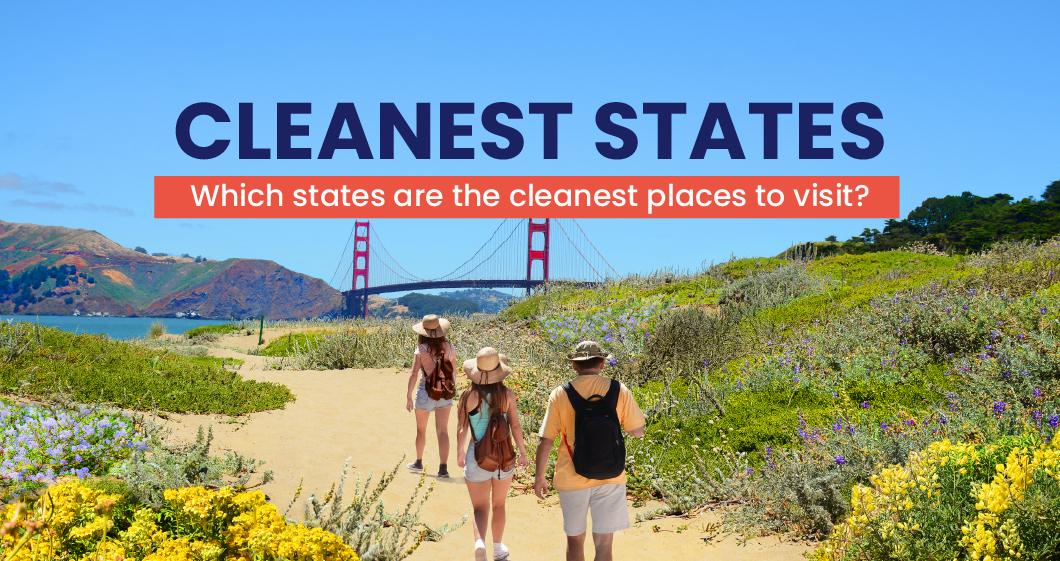 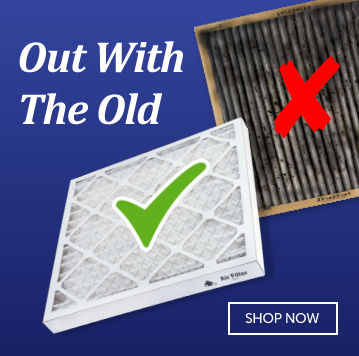